Beta value is also used as a measure of an asset’s risk relative to that benchmark.  The beta of a stock tells an investor how much the stock is moved compared to the general stock market it trades in.

The relation between the beta of stock and the return is directly proportional to each other. Meaning the higher the beta of any stock, the better-expected return from it.

What is Beta Value?

Beta is one of the best indicators of volatility in the price of an investment to the overall markets as represented by a benchmark. A beta of 1 shows that investment is in line with the market movement. The relation between the beta of stock and the return is directly proportional to each other. It means the higher the beta of any stock, the better-expected return from it.

Example: If we take Beta as a beta (बेटा) word in the Hindi language (son) of a father (here the father is Market). The Beta value with respect to the market is like the father and son relation. If the father is moving then the son is also moving along with him. If the father allows his son to play freely then the value of beta increases and if the father is not allowed much then the beta value is less, it can be less than one.

In ordered to get the maximum out of it, there was always a needed to interpret it properly, without which the entire purpose of it may not be served.  Different values of data stand for different things.  For your reference here is a quick description of each data value:

• Beta valued 1:  a beta value of 1 means that the stock returned was as per the market standards.  You could be expected that when the market soars, the stock also would soar, whereas when the market would dip, the price of the stock too would dip.  However, this did not necessarily mean that such stock was risk-free as the market itself had a certain level of risk

• Beta value of less than 1 but more than 0:  these were the stocks that did not have too much risk associated with it.  Additionally, these were also only marginally affected in times of wild market swings.  However, its risk-free trait means that returned too were even lowered than the market returned.  Non-cyclical or defensive stocks fell under this category.

• Beta value more than 1:  these were the high-risk but high-return stocks.  Technology stocks fell under this

• Negative beta:  these were the stocks that tended to go down even when the market was on an upward curve.  They were also known as decaying stocks

• 0 Beta: any financial asset that was unrelated to the stock market fell under this criteria

How Beta is calculated and formula?

• Rs refers to the returns of the stock

• Cov(Rs, Rm) refers to the covariance of the stock and market

• Var(Rm) refers to the Variance of market

What were high beta stocks?

In the stock markets, beta tells about the sensitivity or movement of a stock or playing with respect to the real-time changes with the stock market.  The beta of any index e.g NSE was considered 1.  The stocks (reliance, infy, etc. ) having a beta of more than 1 were considered high beta stocks.

In simple terms, high beta refers to stocks whose prices were very volatile.  Their prices went up and down sharply.  Hence these stocks were considered pretty riskier.

The Beta of the market is defined as 1.0. Individual stocks, ETFs, or mutual funds could have a Beta > 1.0, implying greater volatility than the market. A Beta that is < 1.0 means the stock is less volatile than the market as a whole.

A stock with a beta of 0.47, like AT&T, is half as volatile as the market and will underperform by 50% if the market rises or drop by less than half during a market downturn. This is theoretical, of course, since analysis is not in future prediction. For a company like AT&T that has been around for dozens of years and has a lot of history, the Beta measurement is safer for predicting the future.

Ans: A stock with less than 1 beta value indicates that the stock is less volatile than the index. These stocks are not very risky or less risky stocks.

Que: Is a high beta value good or bad?

Que: What is a high beta stock?

Ans: A high beta index refers to a market index that is made up of stocks with higher-than-average volatility as compared to the overall stock market. A high beta stock means the stock is very sensitive to stock market news and information. It will move faster than lower beta value stocks

Que: How do you interpret the beta value in the stock market? 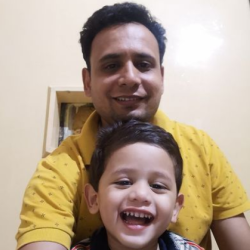 “I love to help people in technology, spirituality and always want people to get better in their lives. Today I’m a stock market enthusiast, a stock trader, web-mobile app developer, blogger, and a spiritual being.”

In stock forecast portal, your complicated research turns into very pretty and simple content here.The good news is you can dive in here, get the required analysis, use your Brain. Visualize everything in crisp colors and understand the simple contents offered to you. Always remember “It is your knowledge that can do the most accurate stock market price prediction”